Located at close quarters of Mahaweli Ganga, Sri Lanka’s longest river which flows towards the natural harbor at Trincomalee, Polonnaruwa had been an important settlement long before it became the capital of second Sinhalese Kingdom. During the reign of Raja Raja Chola I, the king who had built the majestic Brihadeeswarar Temple at Thanjavur (Tamil Nadu, India), the South Indian Chola Kingdom invaded Sri Lanka and defeated the Sinhalese King Mahinda V. Anuradhapura, capital of first Sinhalese Kingdom was abandoned and the Cholas established their capital at Polonnaruwa, southwest of the former capital. The remnants of the Chola rule is present in the form of two Shiva temples, located among numerous Buddhist ruins.

The history of Polonnaruwa is chiefly associated with three Sinhalese kings. King Vijayabahu I recaptured the capital from the Cholas in 1070 and established the second Sinhalese Kingdom. Rather than going back to Anuradhapura, he continued at Polonnaruwa for strategic reasons. During Parakramabahu I’s reign (1153-1186), the city transformed into né plus ultra of prosperity. He followed the footsteps of Vijayabahu I and went on to build several canals and reservoirs, the largest being Parakrama Samudra, named after the King himself and thereby transforming Polonnaruwa into an agrarian powerhouse. Except salt, which was sourced from the coastal areas, the capital was self-sufficient in crops and started exporting rice to India and rest of South Asia. The reign of Nissanka Malla (1187-1196) was not as exceptional as the former two kings. He went on a building spree without considering the economy of the kingdom. Nissanka Malla’s successors did not do any memorable contribution to the capital Polonnaruwa and the Kingdom went into decline and very soon it was overrun by the invading forces of King Kalinga Magha from the present day Odisha (in India) resulting in the establishment of Jaffna Kingdom in 1215.

The ruins of ancient city of Polonnaruwa, which has been added to the list of UNESCO world heritage sites in 1982, is predominantly Buddhist. The guide books have grouped them into different sections for the ease of exploration. A day or two would be sufficient to explore this place and it is very much recommended to hire a trustworthy local guide. Visitors will have to remove the footwear while entering the buildings as most of them are still places of worship and avoid posing for photos with the back turned towards a Buddha idol. After visiting the museum, the tour can be commenced from Royal Palace and then proceed northwards.

The guide showing the sketch of Royal Palace, Polonnaruwa 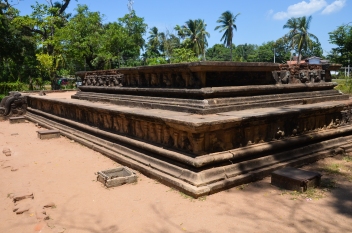 Changing rooms beside the pool

Originally a 7-storey building, only a portion of the walls of the palace remains today. My guide had a sketch of the original  structure built by Parakramabahu and it gave an idea of the Palace’s grandeur. The audience hall in front of the palace is carved with figures of elephants and lions. The pool and the ruins of possibly the changing room lies close to the palace. 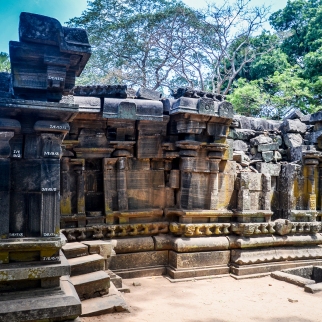 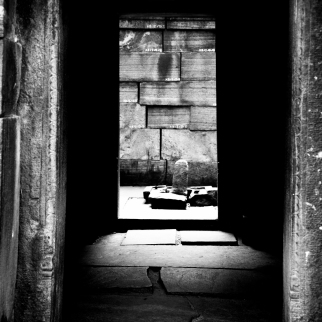 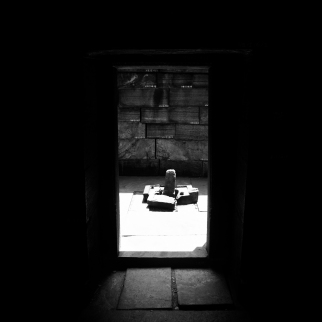 Shiv Devala 2, built by the Cholas is the oldest structure in Polonnaruwa. Being a temple made of stone, it withstood the test of time and in fact rituals are still performed here. The second Shiv Devala is also made of stone but its roof has collapsed. 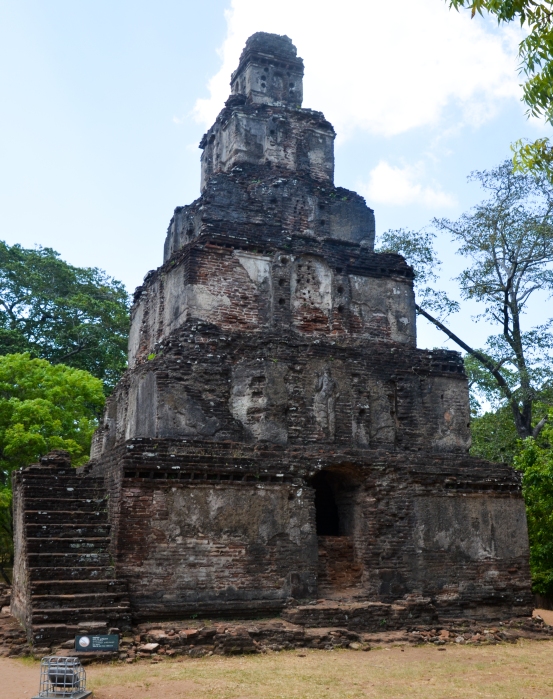 Only 4 such square stupas are found in Lanka. The exact period of construction of this 7-storey palace (of which only 6 remains) is not clear.

An admirable circular shrine with exquisitely carved moonstones. Buddha’s tooth relic (now at Temple of Tooth in Kandy) was kept inside Vatadage.

Hatadage was also a shrine that housed the tooth relic. It was built by King Nissanka Malla.

This stone book built by Nissanka Malla can be considered as his autobiography – all his heroic deeds and virtues are inscribed here. 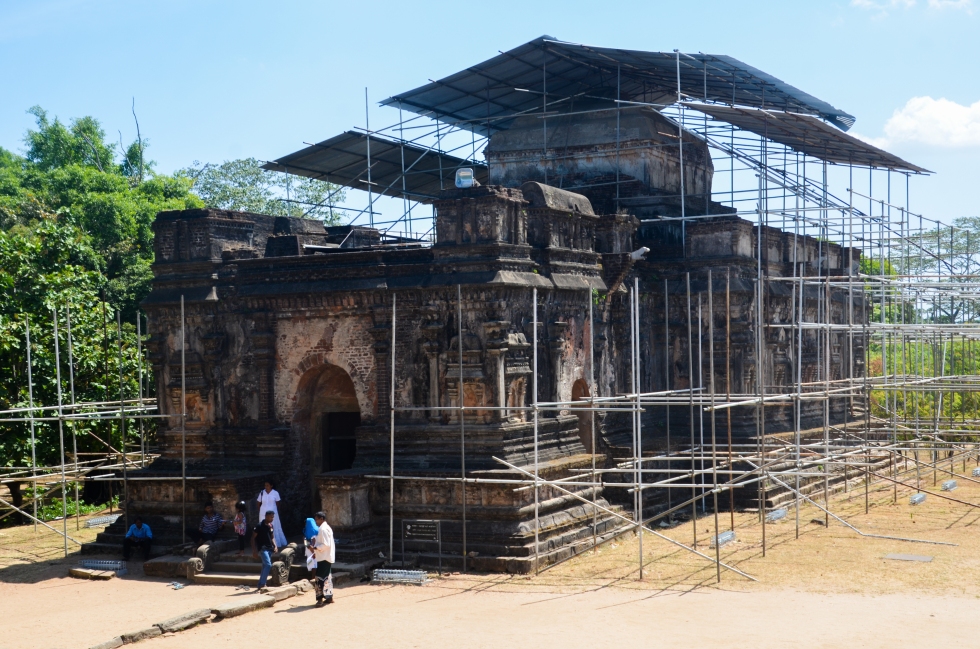 The air inside Thuparama Image House is cool and carries the aroma of incense sticks lighted by the devotees in front of the Buddhist  statutes. The roof is given extra protection as part of the conservation process.

Rankoth Vehera is the fourth largest stupa in Sri Lanka and the largest in Polonnaruwa. It resembles Ruwanwelisaya Dagoba of Anuradhapura. 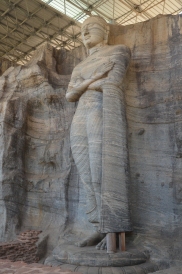 Gal Vihara is a series of statues carved out of a single large rock. First statue from the left is that of  meditating Buddha in seated position. Second shrine contains a smaller statute of Buddha. Identity of the third status is disputed – it is believed to be of either Buddha himself or that of monk Anandha, a discipline of Buddha. The fourth and rightmost statue is of reclining Buddha who attained salvation. I was told that this entire rock was hidden inside sand pile during Chola invasion.

An extensive 12th century monastery. it was the center of Buddhist studies

Among the numerous buildings built by the kings  I finally found this stupa built by King Parakramabahu’s wife. It was initially christened as Rupawathi Stupa. It is the second biggest Stupa in Polonnaruwa, next only to Rankoth Vehara 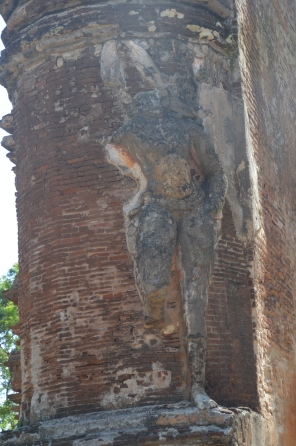 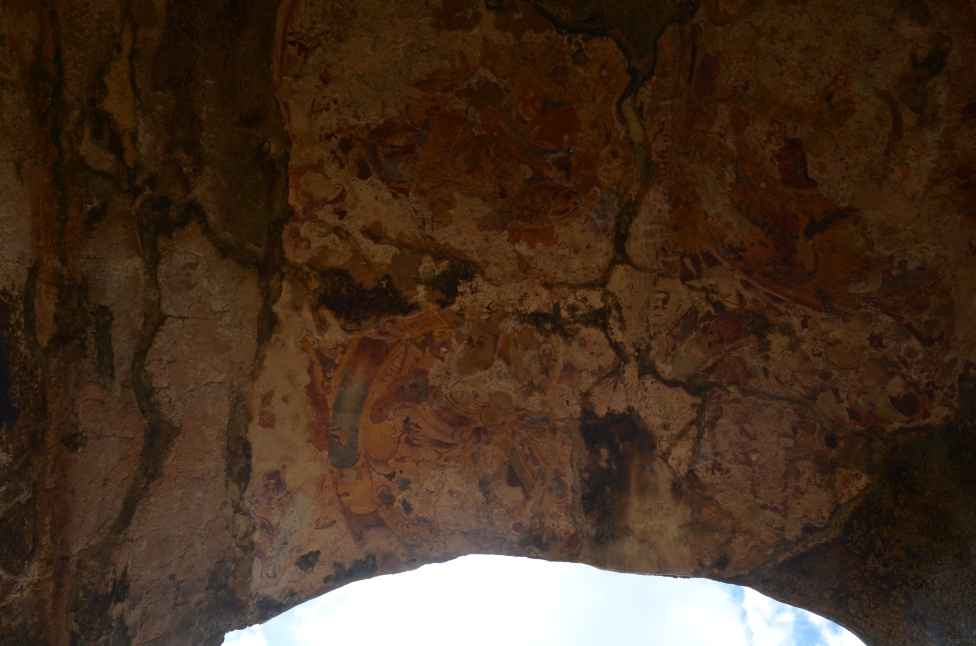 This imposing image house is believed to be part of the Alahana Pirivena. Do not miss out the sculpture of Naagin, female snake god which is exclusive to Polonnaruwa in Sri Lanka

Visited in August 2015 and it was a solo backpacking trip. Feel free to contact me for any type of queries about the places I have visited 🙂