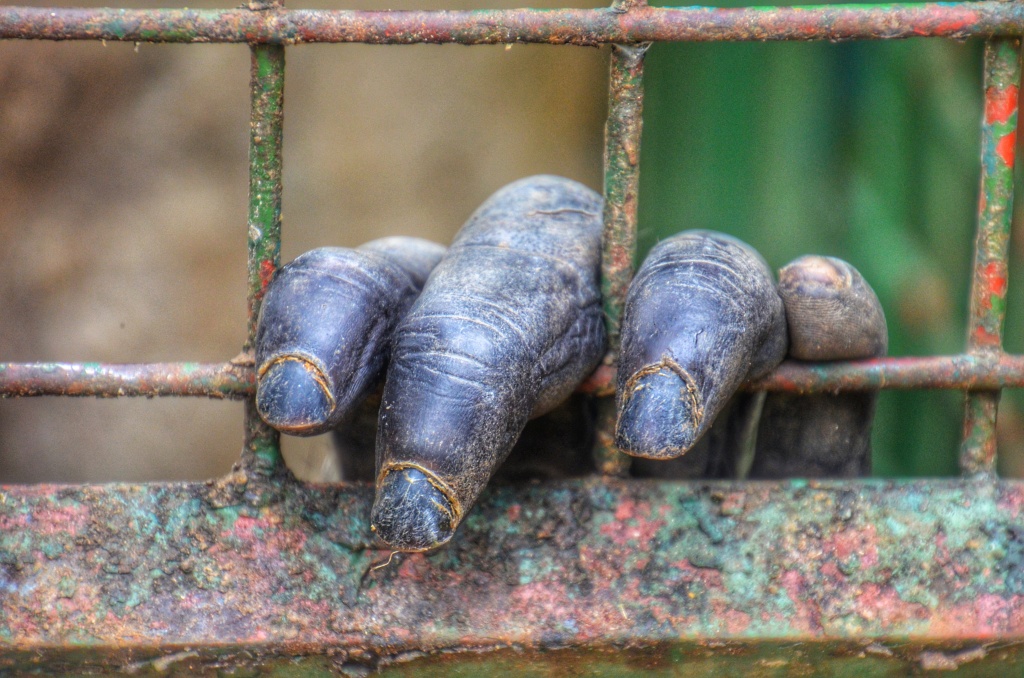 “Do you know why Kiri is kept in a cage, alone and away from rest of the chimps?” The caretaker enquired

It was a sunny afternoon and the “zookeeper for a day” at Uganda Wildlife Conservation Education Centre (UWEC) in Entebbe (Uganda) was proceeding in an amazingly awesome way. During the first day in African soil I had pleasant interactions with a cheetah, Edward –the cute baby elephant, Charles – another young elephant, giraffe, and even rhinos. Now I guess you would agree with my “amazingly awesome” adjective!!! Just when I thought I won’t be able to handle anymore African awesomeness I was told by the caretakers that next I’ll be taken to Chimpanzees’ shelter. Uganda and Rwanda offer trekking opportunities to watch Gorillas and Chimpanzees in the wild but exuberant price of packages were too hot to handle for the humble backpacker from Kerala. So I was more than satisfied with the opportunity to interact with chimps at Wildlife Centre.

The caretaker for chimps was a bit slow at first and seemed uninterested in entertaining visitors. But then he slowly opened up and became talkative.
“Each animal here has a name. We call them by their names” he said. “We don’t treat them as animals. We all have become emotionally attached. And they too trust us very much”
I nodded in agreement. I could feel that he was getting emotional. In front of us the chimps were being playful in their territory surrounded by a water moat.

“Chimps can’t swim and they are afraid of water” he announced and beckoned me to a large cage adjacent to the building.
A lone chimp sat inside the cage. Caretaker’s approach excited the chimp. The excitement triggered a series of swings and jumps. I was trying to capture all the action but was struggling to shoot due to the metal grills of the cage. The chimp looked older than rest of the pack. Her fur has greyed and thinned.
“Her name is Kiri. Do you know why only Kiri is kept inside a cage, alone and away from rest of the pack?” He threw the question at me interrupting my vague attempts of photo capture.
“She might have some infection and is undergoing treatment?” I answered
“No”
Kiri retired to a hammock after exhausting the initial excitement.
“OK. She is too aggressive?”
“No!!!”
“She is too old???” I shrugged. I have exhausted my guesses.
“This Chimp is a hermaphrodite” he said with a hint of sadness in his voice.
So? Is this the reason to keep the chimp in a cage? Why can’t Kiri interact with rest of the chimp gang? After all hermaphroditism is not infectious!!! I almost sputtered out the words.
The caretaker as if sensing my vexation said “We rescued her from a black magician. She was held captive and was relentlessly tortured”
He took out the banana and beckoned her and in a fraction of second she was leaning against the grills of the cage.
“Did you notice that her fur has thinned? That black magician used to pluck it out and sell it. People believed that it brought good luck” his voice was grave
Africa with a myriad of beliefs and superstitions considered anything unnatural as an item for worship. Hermaphroditism is a phenomenon in which an organism has the reproductive organs of both male and female. It is very rare in Chimpanzees and in fact Kiri is the only recorded hermaphrodite chimp. And though Kiri has reproductive organs of male and female, neither are fully developed.
He was still teasing her playfully by not handing over banana and she was pleading with her eyes.
He continued “The fur turn grey when chimps are under immense stress”.
That explains her aged appearance!
He then handed over the banana. Kiri is delighted.
“But why is she still kept in a cage” I enquired
“We introduced her to the woman pack first” he said “but they got frightened and did not accept her to the pack. Then we tried putting her in male pack but all the males except Zakayo (Died 26 April 2018, 54 years), the oldest chimp in captivity in Africa, attacked Kiri. So we had to keep her in this cage for her own safety.”

The DNAs of Chimps and humans are 96% similar and it appears that the similarities doesn’t end with genetic structure itself – The way humans and in this case the chimps treating someone who is “different” from their peers seems similar – attack and outcast the individual for his/her appearance. Kiri being the only hermaphrodite chimp doesn’t have a community to help her or to speak for her rights. She is alone with the whole family turned against her. But thanks to her distant cousins, the humans of UWEC for bringing her back to life.

We two stood in silence thinking about Kiri. Kiri too was silent possibly thinking about more bananas. While I was about to say goodbye to her she gave a quick smile – the subtle smile of a fighter who endured hardship and believes that the world is still a good place to live; a motivating smile to all those individuals who are alone fighting the battles forced upon them; the smile that said “Be strong and Hold on!!!” The smile that transformed into a deafening bellow of survival.

Another version of the Kiri’s life is posted on Daily Monitor Uganda. You can read it here